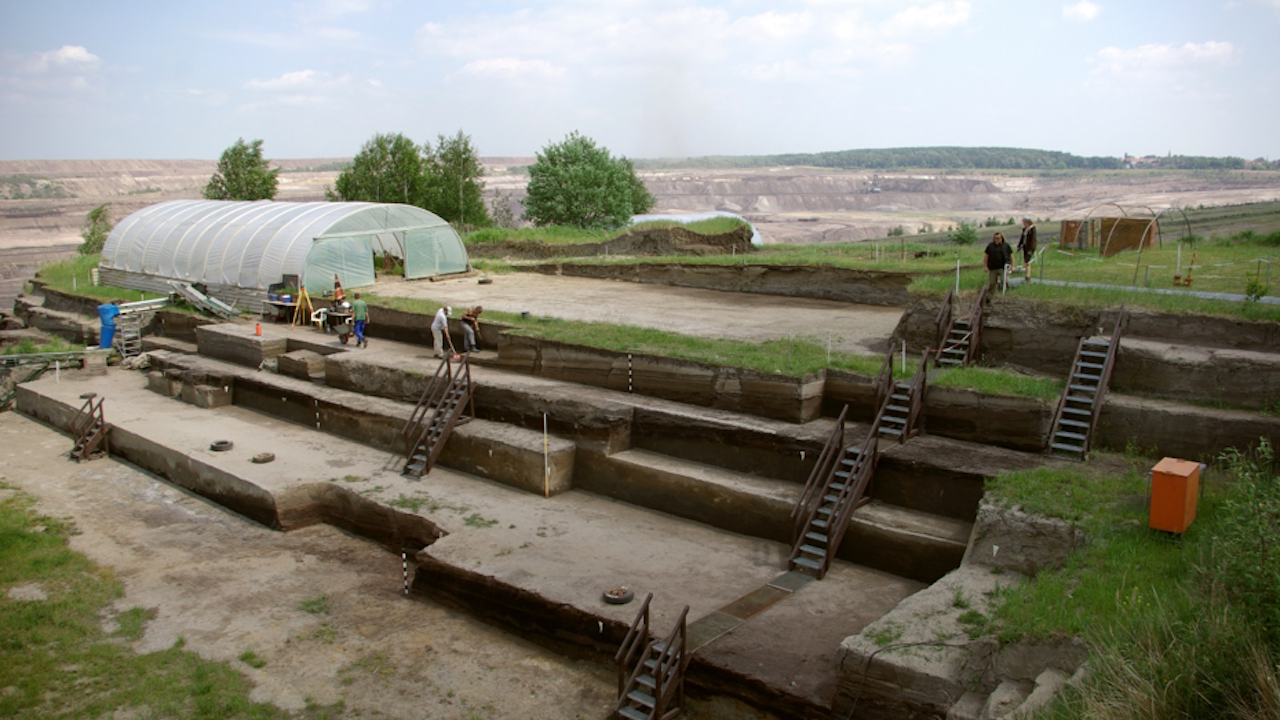 Overview of the excavation at Schöningen. Picture: J. Serangeli

ce Age hunters in northern Europe were highly skilled and used a wide range of effective weapons. A wooden throwing stick found and studied by the teams of the University of Tübingen (Germany), the University of Liège (Belgium) and the Senckenberg Centre for Human Evolution and Paleoenvironment in Schöningen, Lower Saxony (Germany), highlights the complexity of early hunting. The discovery is presented in a new paper in Nature Ecology & Evolution.

Research at Schöningen demonstrates that already 300,000 years ago Homo heidelbergensis used a combination of throwing sticks, spears and thrusting lances. Prof. Nicholas Conard and Dr. Jordi Serangeli, who direct the excavation attribute the exceptional discovery to the outstanding preservation of wooden artifacts in the water saturated lakeside sediments in Schöningen. 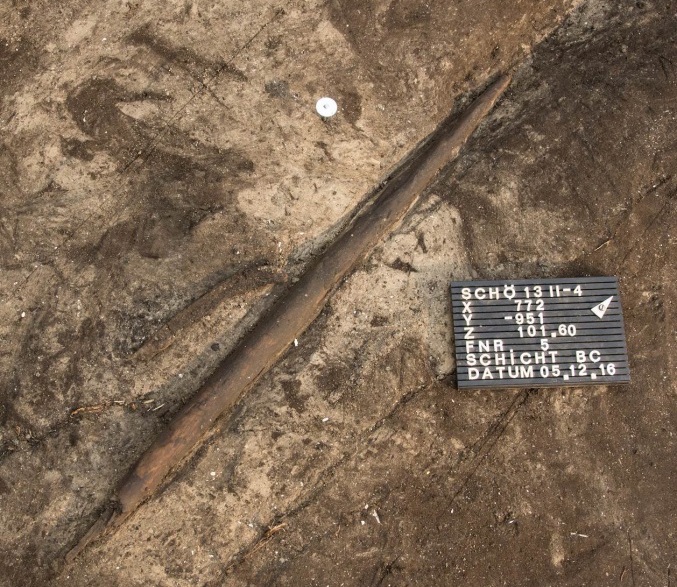 The new throwing stick in situ at the time of discovery.
Picture: A. Gonschiore

The throwing stick was recovered in layer 13 II-4, which in the 1990s yielded examples of throwing spears, a thrusting lance and additional wooden tools of unknown function. Like almost all of these finds, the new artifact was carefully carved from spruce wood, as confirmed by Dr. Gerlinda Bigga, who studies the structure of the wood used for tools.
The throwing stick is 64.5 cm long, 2.9 cm in diameter and weighs 264 grams. The cross-section is asymmetrical with a round and a flatter side.

Use-wear analysis conducted by Dr. Veerle Rots, Senior Research Associate at Fund for Scientific Research – FNRS, head of the TraceoLab research group of the University of Liège shows how the maker of the throwing stick used stone tools to cut the branches flush and then to smooth the surface of the artifact. The artifact preserves impact fractures and damage consistent with that found on ethnographic and experimental examples of throwing sticks. 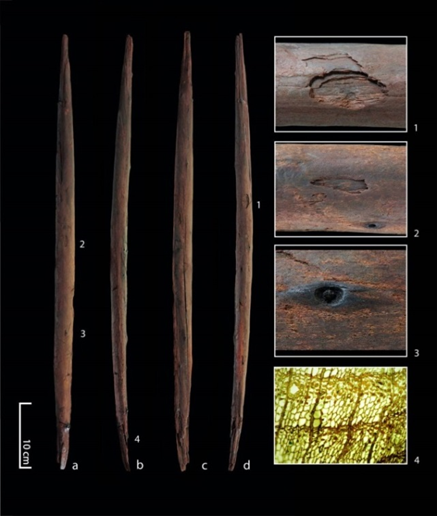 
1: Large depression with stepped morphology caused by impact.
2: Impact damage, in the form of two small depressions.
3: Example of a branch that has be cut and ground flush with the surface of the throwing spear.
4: Thin section from the damaged end of the artifact showing the well preserved cell structure of the spruce wood.

When in flight, throwing sticks, also referred to as „rabbit sticks” and “killing sticks” rotate around their center of gravity, and do not return to the thrower, as is the case with boomerangs. Instead the rotation helps to maintain a straight, accurate trajectory while increasing the likelihood of striking prey animals. They are effective weapons at diverse distances and can be used to kill or wound birds or rabbits or to drive larger game, such as the horses that were killed and butchered in large numbers in the Schöningen lakeshore. Remains of swans and ducks are well documented in the find horizon.

Experiments show that throwing sticks of this size reach maximum speeds of 30 meters per second. Ethnographic studies from North America, Africa and Australia show that the range of such weapons varies from 5 to over 100 meters.

The chances of finding Paleolithic artifacts made of wood are normally zero, but Schöningen, with its exceptional preservation, has yielded by far the largest and most important record wooden tools and hunting equipment from the Paleolithic. 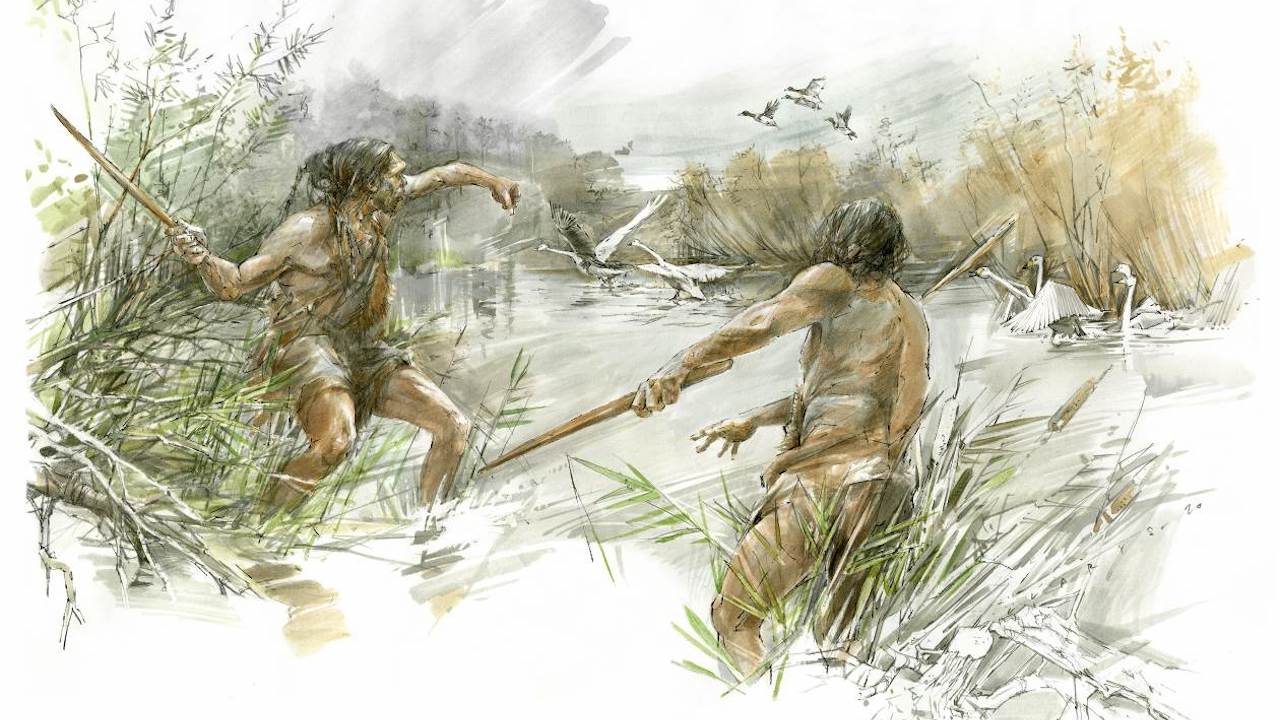 Hunters on the Schöningen lakeshore likely used the throwing stick to hunt waterbirds (top) or to drive horses to where they would be killed with spears (below).

The excavations at Schöningen are funded by the Ministry of Science and Culture of the State of Niedersachsen and are conducted in cooperation with the State Heritage Office of Lower Saxony. The research of Veerle Rots is funded by the European Research Council (ERC Grant Agreement Nr 312283), the Fund for Scientific Research (FNRS) and the University of Liège.

Dr. Veerle Rots
Senior Research Associate at Fund for Scientific Research – FNRS, head of the TraceoLab research group of the University of Liège 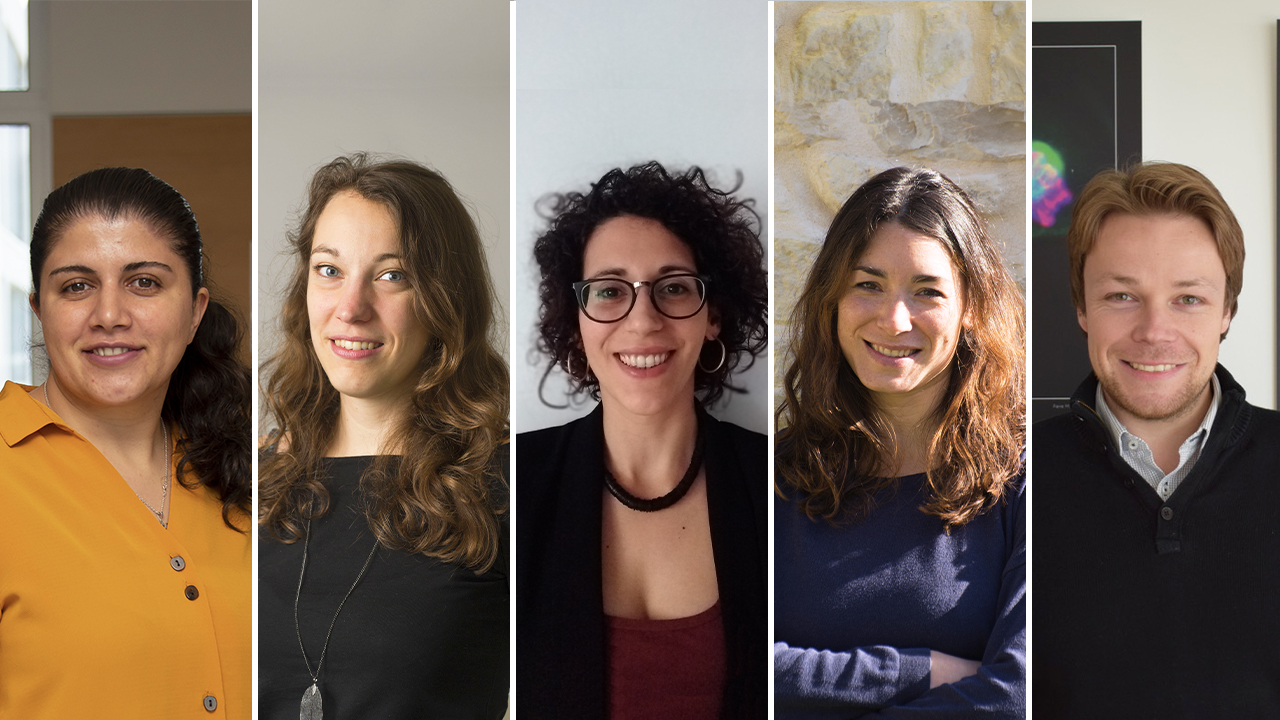 These European Postdoctoral Fellowships of Excellence are awarded to brilliant researchers wishing to develop their scientific career through a mobility experience in Europe. 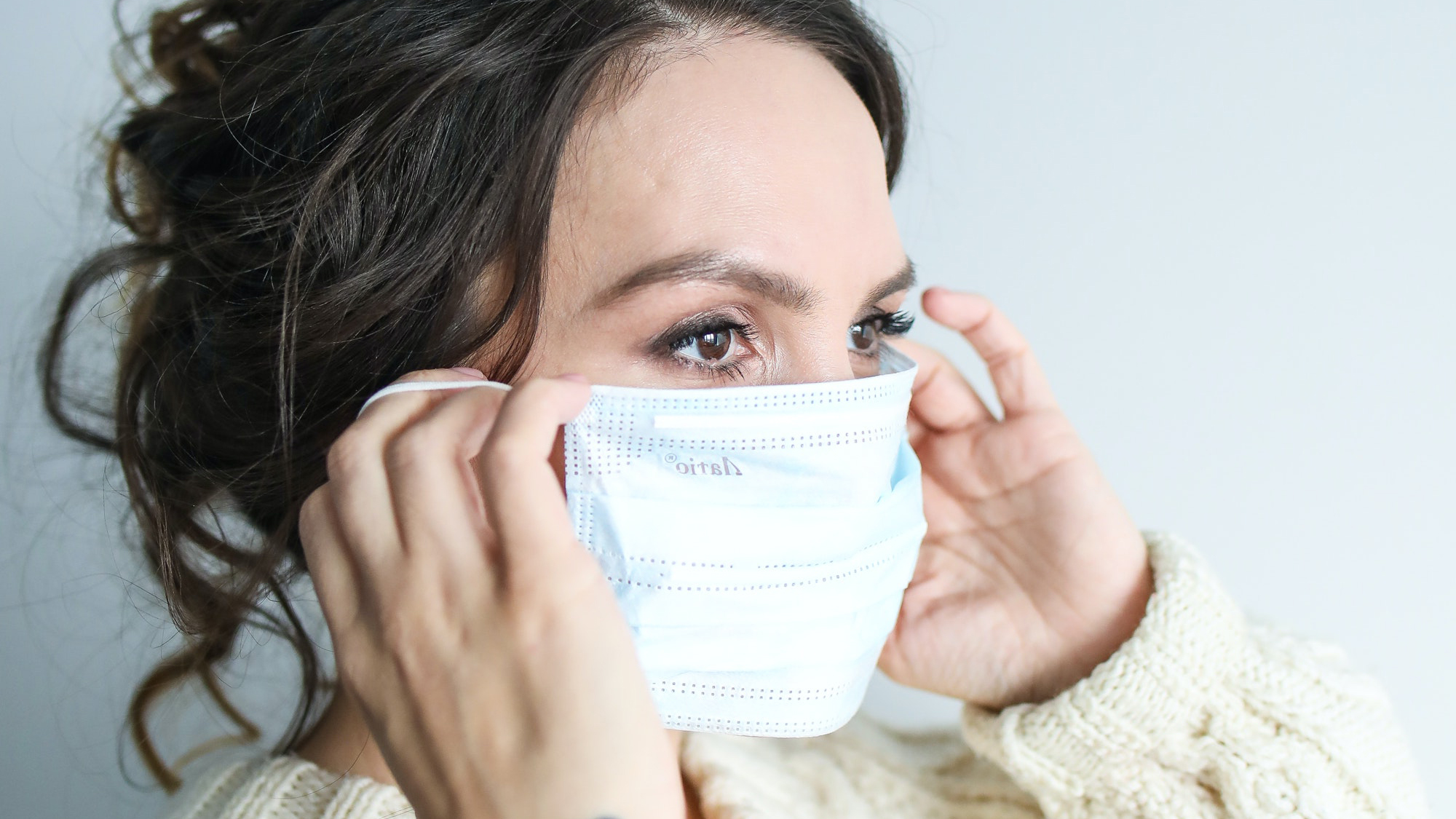 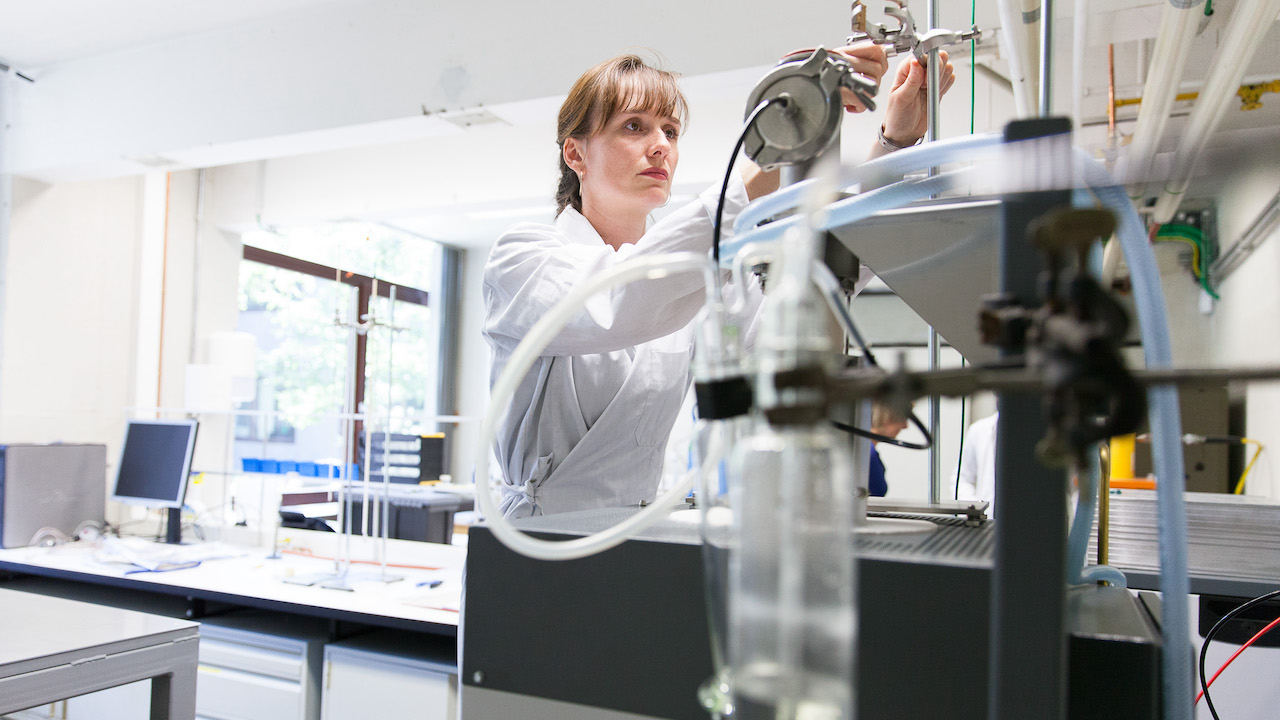 ULiège wishes to defend equal opportunities and participation for all. It works towards this goal in collaboration with various actors in society and intends to put welfare and respect at the centre of its priorities.