The SPECULOOS South observatory on the hunt for habitable exoplanets 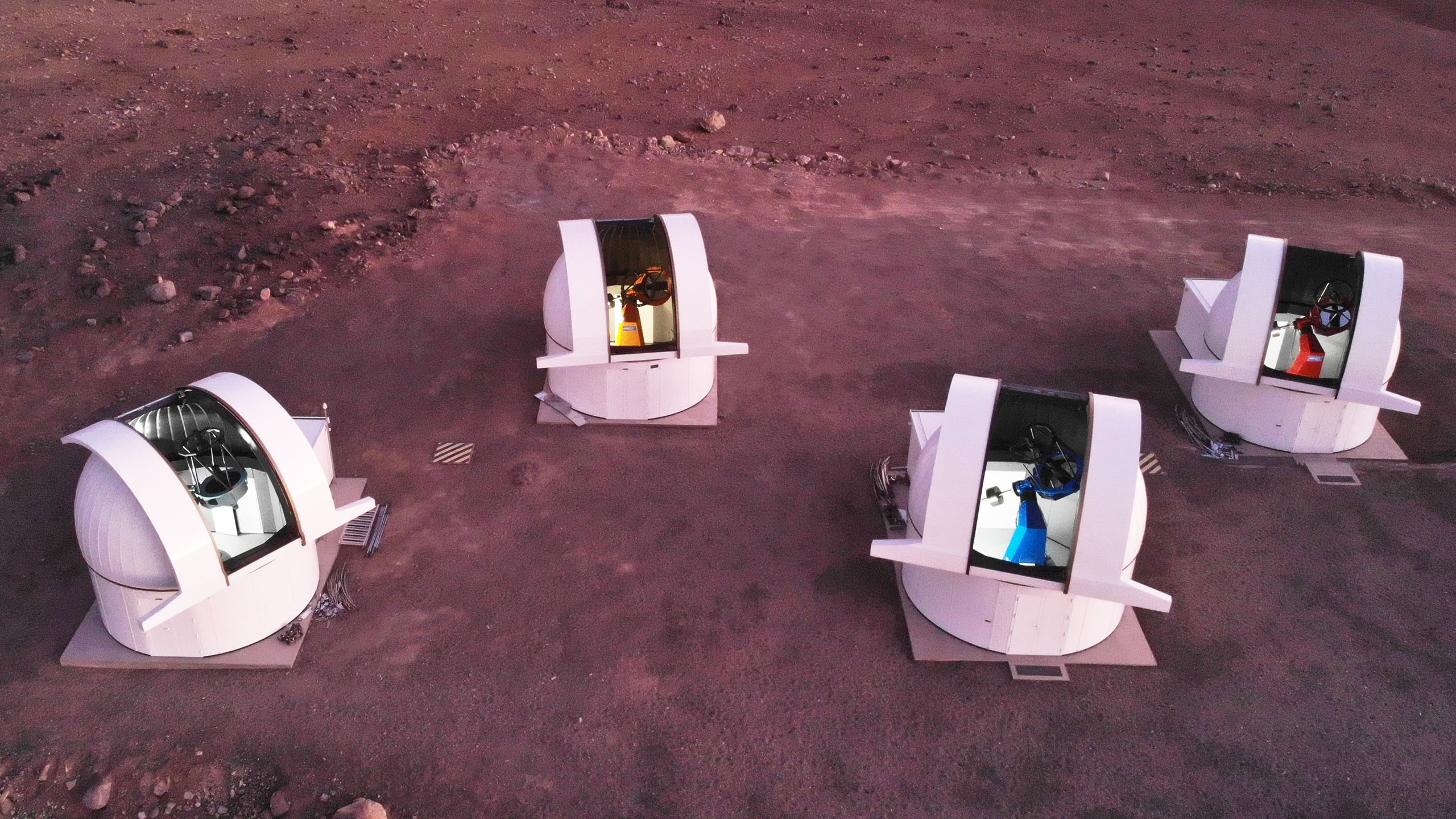 The SPECULOOS Southern Observatory (SSO), a collaboration between the universities of Liège and Cambridge, was successfully installed at the Paranal Observatory, and its telescopes obtained their first engineering and calibration images (a process called "first light"). After this commissioning phase, this new telescope network will begin its scientific activities in January 2019.

The SSO is at the heart of a new exoplanet detection project called "Search for habitable Planets EClipsing ULtra-cOOOl Stars", SPECULOOS. It consists of four telescopes equipped with one-meter mirrors. The telescopes, named Io, Europa, Ganymede and Callisto after the four Galilean moons of Jupiter, will enjoy perfect viewing conditions at the Paranal site, where the very large ESO telescope (VLT) is also located. Paranal offers an almost perfect site for astronomy, with a dark sky and a stable and arid climate.

The SPECULOOS project aims to search for planets the size of the Earth that could potentially be inhabited around ultra-cool or brown dwarfs stars. Despite that there are some examples of exoplanets orbiting these stars, they represent only a tiny fraction of all exoplanets discovered, and even less are potentially habitable. Although these small stars are more difficult to observe, they are abundant (they represent about 15% of the stars in our galaxy), and SPECULOOS is designed to explore the nearest 1000 stars, the brightest and smallest, and thus detect Earth-like planets in their habitable zone.

"SPECULOOS gives us an unprecedented ability to detect terrestrial planets that eclipse some of our smallest and coldest neighbor stars," explains Michaël Gillon, the Liège researcher at the head of the SPECULOOS project. "This is a unique opportunity to study these other worlds in detail."

SPECULOOS will search for these exoplanets by the so-called transit method. When a planet passes in front of its star, it blocks part of the star's light, causing a small partial eclipse and a subtle but detectable attenuation of the star's light. Exoplanets with smaller host stars block more of the light from their stars during transit, making these periodic eclipses easier to detect.

So far, only a small fraction of the exoplanets detected by this transit method have been found to be the size of the Earth or smaller, due to the limitations of telescope observation specifically dedicated to this detection. However, the SPECULOOS project could lead to new discoveries of planets in this size range, both because of the proximity and small size of the stars targeted by the project, and the relatively large diameter of the telescope mirrors.

"These new telescopes will allow us to detect not only potentially habitable exoplanets around nearby stars, but also exoplanets that can then be studied in great detail, especially to look for chemical traces of life. This is an extremely exciting time for the science of exoplanets." concludes Michaël Gillon

Remarkable equipment at the foot of the VLT

"Telescopes are equipped with very sensitive cameras in the very near infrared," explains Laetitia Delrez, co-investigator of the SPECULOOS team, a post-doctoral fellow at ULiège currently at Cambridge University. "This radiation is a little beyond what human eyes can detect, and it is the primary emission of dark stars that SPECULOOS will target. »

The telescopes and their brightly coloured frames were built by the German company ASTELCO and are protected by domes from the Italian manufacturer Gambato. The project will be supported by the two 60 cm TRAPPIST telescopes in Liège, one at ESO's La Silla Observatory and the other in Morocco. The project will later include the SPECULOOS Northern Observatory and SAINT-Ex, which are currently under construction in Tenerife (Spain) and San Pedro Mártir (Mexico).

About the SPECULOOS project

The SPECULOOS South Observatory is a project carried out by the University of Liège (Belgium) and the Cavendish Laboratory in Cambridge (United Kingdom), under the direction of Michaël Gillon, researcher at the head of the "EXOplanets in Transit: Identification and Characterization" (EXOTIC) group within the Department of Astrophysics, Geophysics and Oceanography at the University of Liège. The European Southern Observatory (ESO) supports SPECULOOS South and hosts it at the Paranal Observatory located in the Chilean Atacama Desert. SPECULOOS South is mainly funded by the European Research Council.

ESO is the leading intergovernmental astronomy organisation in Europe and by far the most productive ground-based astronomical observatory in the world. It has 16 Member States: Austria, Belgium, Czech Republic, Denmark, France, Finland, Germany, Ireland, Italy, Netherlands, Poland, Portugal, Spain, Sweden, Switzerland, Sweden, United Kingdom and United Kingdom, as well as the host country of Chile and Australia as a strategic partner. ESO has an ambitious program focused on the design, construction and operation of powerful ground-based observation facilities that enable astronomers to make important scientific discoveries. ESO also plays a leading role in promoting and organizing cooperation in astronomical research. The ESO operates three unique world-class observation sites in Chile: La Silla, Paranal and Chajnantor. In Paranal, ESO operates the Very Large Telescope and its world-leading interferometer, as well as two measuring telescopes, VISTA, operating in the infrared and the VLT visible light telescope. ESO is also a major partner in two facilities on Chajnantor, APEX and ALMA, the largest astronomical project in existence. And on Cerro Armazones, near Paranal, the ESO is building the very large 39-metre telescope, the ELT, which will become "the world's largest eye on the sky".