TOI-270 and its 3 worlds: an interesting new target in the study of exoplanets

The American space telescope TESS, dedicated to the search for exoplanets, has just discovered 3 planets around the star TOI-270. This discovery was confirmed by many terrestrial telescopes, including TRAPPIST-South, a telescope of the University of Liège located at the European Southern Observatory (ESO) of La Silla in Chile. The discovery of this new system has just been published in Nature Astronomy (1).

ASA's newest exoplanet hunter, the Transiting Exoplanet Survey Satellite (TESS), has just discovered three new worlds orbiting a nearby star 73 light years away. The TESS mission, a collaboration between NASA and MIT, is dedicated to the search for exoplanets in transit around nearby stars. Launched last April, the telescope has already identified some interesting targets, including TOI-270, a dwarf star located in the southern constellation of the Painter. By taking a closer look and using a consortium of terrestrial telescopes - including ULiège's TRAPPIST-South telescope - an international team of researchers has just confirmed the presence of three planets in transit around the star. The small Liège telescope, located in Chile and financed mainly by the FNRS (the Belgian national scientific fund), confirmed the transits and ensured that the signal detected by TESS was indeed on the right star. 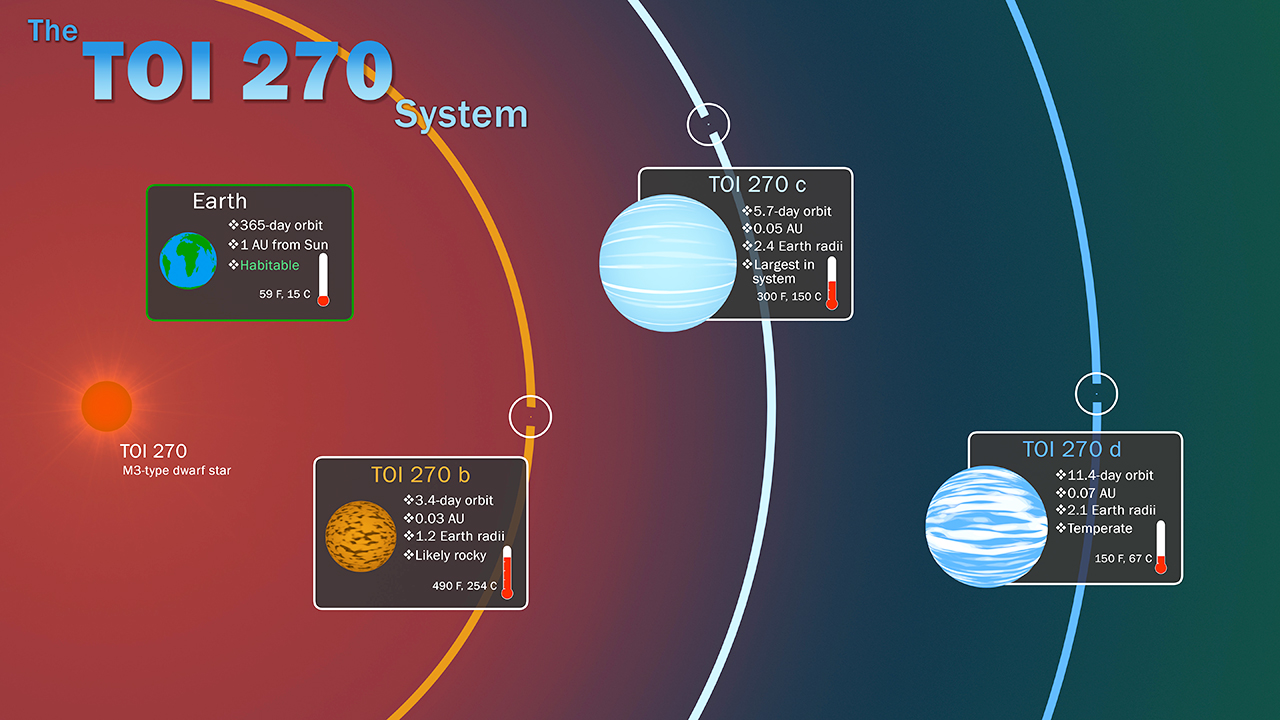 "The star TOI-270 is very close to us, and is therefore much brighter than the host stars of comparable systems," explains Maximilian Günther, the first author of the article and a researcher at the Massachusetts Institute of Technology (MIT). Through in-depth monitoring observations, we will soon be able to determine the composition of these worlds, whether atmospheres are present, what gases they contain, and more."

TOI-270 is a red dwarf about 40% smaller than the Sun in size and mass, and its surface temperature is about one-third colder than that of our star. As for the planets, we already know that TOI-270b, the closest to the star, which is about 14 times shorter than Mercury's distance from our Sun, orbits its star in 3-4 days and is about 30% larger than the Earth. If this first planet is probably rocky, the other two, TOI-270 c and d, which are more than twice as large as our planet, probably have a thick atmosphere of hydrogen and helium and would be more like miniature versions of the gaseous planets Neptune and Uranus than rocky super-Earths. They complete an orbit around the star every 5.7 and 11.4 days, respectively.

The TOI 270 system is so compact that the orbits of Jupiter and its moons in our own solar system offer the closest reasonable comparison, as shown here. Source: NASA Goddard Space Flight Center/Scott Wiessinger

"An interesting aspect of this system is that its planets are on either side of what could be called a 'planetary desert'," says Fran Pozuelos, second author of the article and postdoctoral researcher at the ASTROBIOLOGY and STAR research units at the University of Liège. "Indeed, it is now well established that exoplanets with a size between 1.5 and 2 times larger than those of the Earth are quite rare in the galaxy. TOI-270 is an excellent laboratory for studying in detail objects located on either side of this 'desert', and this should help us to better understand its origin, and ultimately how planetary systems are formed and evolve."

The research team is particularly interested in the farthest planet, TOI-270 d, which receives three times as much energy every second from its star as the Earth receives from the Sun, making it the most temperate world in the system, and, as such, a rarity among known transit planets. The team hopes that further research will lead to the discovery of planets other than the three currently known planets. In particular, TOI-270 should be a prime observation target for NASA's James Webb Space Telescope (JWST), which is expected to be launched in 2021.

Until then, astronomers from the University of Liège will continue to participate in observations and data analysis. "TESS is what is called an open project," explains Michaël Gillon, FNRS Senior Research Fellow at ASTROBIOLOGY Research Unit and co-author of the scientific paper, which means that all the data collected as part of the project are public. This allows any interested scientist to join the project by participating in working groups led by the TESS team, or even to use the project data, downloadable from the Internet, directly to search for planets themselves. At the University of Liège, we participate in a TESS working group focused on confirming possible transits detected by the satellite, using the telescopes of our TRAPPIST and SPECULOOS projects."

The University of Liège, a stakeholder in the ESA's CHEOPS (CHaracterising ExOPlanets Satellite) space telescope, which will be launched at the end of the year and will be dedicated to the observation of nearby planetary systems such as TOI-270, will be able to rely on its access to the telescope to further study this new exoplanetary system. These future observations could lead to the discovery of other rocky planets at slightly greater distances from the star, where cooler temperatures could allow water to exist in liquid form on their surface, perhaps making them suitable for hosting forms of life.